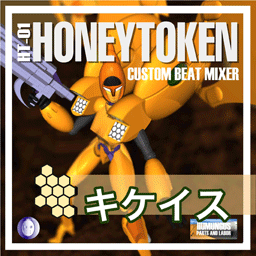 01 Theme From Aye Aye – Originally created for an online compilation that lost its legs to an internet lazy bomb, this track started working at Base Honeytoken as an intern and moved its way up to its current position.

02 Thwarted – Part of an experiment to create tracks exclusively with Garageband . This track was one of the few prototypes to show promise and was transferred immediately to the Honeytoken Launch facility. It features lots of mouth percussion and samples with supplemental menace.

03 Biology – Every day is trying when you’re part of a post-apocalypse urban mutant teenage superhero contingent. But remember, when life gives you lemons, make a transforming Lemonator Assault Vehicle.

04 I Am Bacteria – Sometimes you work too late and have to take the special late night techno funk bus service back to the base. You see some weird characters on there, I tell ya.

05 Groundhog Day – This track started off as a bunch of disparate components at the old Ensoniq ASR-10 Environmental Beatstation. It gradually evolved over time, adding mass from discarded polyrhythmasts and infused bozotrons, and with the help of Lady Humungus and Polly Alloy became a significant contributor to the Phobos Music Revolutionary Front.

06 Water – Every once in a while, the cook at the mess hall gets a little squirrelly and serves up something you weren’t quite expecting. Best just to tell him it’s delicious and have another helping.

07 Swanengine – The nanotechnicians at the facility often have flights of fancy more becoming of hallucinating liberal arts majors than the pioneers of emerging technologies they really are.