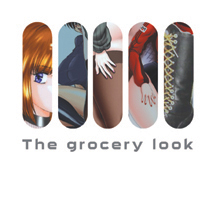 The follow up release to the ever popular Mint For Pillow, The Grocery Look adds a thrilly thumpiness to Lord H’s repertoire of 80’s tinged music. It’s time to don your dancefloor parachute backpack, plaster your hair in Aqua Net, and put your hands in the air like you just don’t care. Available on iTunes, Bandcamp or contact us for a hard copy.

The Grocery Look was recorded in Humungus Parts and Labor’s studio of choice, The Wasteland. During the course of recording The Grocery Look, The Wasteland was relocated to a new facility in Richmond, CA. Lord Humungus engineered and produced all the sessions. The usual hardware and software suspects were also present, including:

01 Psychonellie – The original version of this song had a slower, more plaintive feel. Humungus Parts and Labor released a club remix in 1995 (The Holy Mixdown), which sampled the original and added an infectious groove. This version is a re-recording of the Holy Mixdown created especially for this release.

02 Outside – The music for this song popped out fully-formed from the forehead of Pepe, Zeus’ younger cousin. The lyrics arrived much later, transcendental train delays being what they are.

03 I Could Eat You Up – Never discount dreams of a vampire menage-a-trois. Retrieved from the archives, this 1992 song got an expensive manicure and pedicure before showing up for its 2003 appearance. This was one of the first tunes to utilize the ASR10.

06 Protective Cloud Layer – This tune was originally featured on the Clifford’s compilation, Lard Motel/Succulent. This song was going to be remixed for The Grocery Look, but a fatal hard drive crash destroyed the original samples and sequences (woohoo!). The original DAT mix was used in lieu of completely recreating the song.

07 Miranda Overskies – Clinking glasses with Astrud. Several remixes of this song were attempted, and then quickly cast aside like week-old banana bread — first mix was best.

08 Cocteau – This track is from the original 4-track master, which was improvised directly to tape. This song was also used as background music for scenes in Closer Than The Boy Next Door (1997), a film by acclaimed director Bo Mehrad.

09 And Kisses Slow – The first incarnation of this song appeared on S.I.g.’s 1989 album, Chickens and Venetians. It was edited to fit on the album, but this re-recording is the full length version. Since most of the samples used in the original have been lost, they had to be re-sampled from the original master tapes or recreated from scratch for this release.

10 Faye – This song is heavily reworked from the original version which first appeared on Chickens and Venetians. It stemmed from a charming encounter at the mall with a girl from Kent.

Special thanks to Lynn-Holly Johnson and Cavaleri & Associates for sample clearance on Track 3.